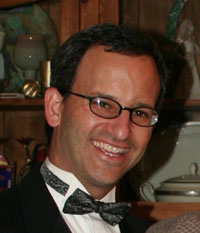 Rabbi Scott Meltzer is a Lecturer in Study of Religion at San Diego State University and also serves as rabbi of Ohr Shalom Synagogue in San Diego.  He is currently the President of the San Diego Rabbinical Association and chairperson of San Diego’s Joint Synagogue—United Jewish Federation Committee.

Rabbi Meltzer served as Dean of Students and Residential Life at the American Hebrew Academy in Greensboro, North Carolina and was Director of Education of The Brandeis-Bardin Institute (BBI) and its renowned program, the Brandeis Collegiate Institute (BCI), where he was responsible for programs in residential and experiential Jewish education. He has also served congregations in Santa Maria, California, San Diego, and Butte, Montana, as well as a hospital chaplaincy in New York.

Rabbi Meltzer graduated and was ordained through the Hebrew Union College. He earned a B.A. with honors in Chemistry from Harvard University before attending rabbinic school and holds a Master’s Degree in Religion and Social Ethics from the University of Southern California.