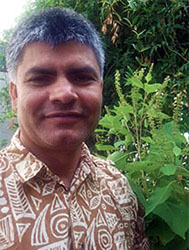 Sthaneshwar Timalsina obtained his Master’s degree in 1991 from Sampurnananda University in Varanasi, India, and taught for several years at Nepal Sanskrit University, Kathmandu. He completed his PhD from Martin Luther University in Halle, Germany (2005) with a focus on the history of the philosophy of Advaita. His dissertation is published under the title, Seeing and Appearance (Shaker Verlag, 2006). Before joining San Diego State University in 2005, Timalsina taught at the University of California, Santa Barbara, and Washington University in St. Louis. His areas of research include classical Hindu, Buddhist, and Jain literature and philosophies with a specific focus on consciousness studies. His book, Consciousness in Indian Philosophy (Routledge, 2008) is  a comparative study of Advaita and Buddhist understandings of the self and consciousness. Timalsina also works in the area of Tantric studies and his recent publications, Tantric Visual Culture: A Cognitive Approach (Routledge, 2015), and Language of Images: Visualization and Meaning in Tantras (Peter Lang, 2015), explore the cognitive and cultural domains of Tantric visualization. Timalsina has published over forty articles, book chapters, and review essays on religion, culture, literature, aesthetics, and philosophy. Timalsina teaches courses on Hindu, Buddhist, and Jain religious, philosophical, and literary traditions, and his teaching interests include ‘Religion and Science’ as well as ‘Yoga Philosophy and Practice.’ His current areas of research include theories of mind, with a particular focus on the cognitive aspects of recognition, memory, imagination, and emotion.